"Meters, liters, and Kelvins. Oh my!!" - paraphrasing Dorothy setting off to Oz. 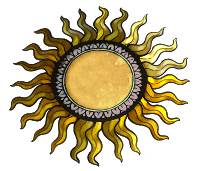 The system of measurement used in science, and in this book, is the Metric System. It is logical, clear, and easy to use. In this short(ish) chapter we summarize the basic metric units used in science, review metric prefixes and look at some relationships.

The Metric System is based on the number 10, or multiples thereof, and so has similarities to Scientific Notation, as will be seen in the metric prefix system.

The basic metric unit of Volume is...is the Liter abbreviated “L” and/or “l”.

A degree Celsius is equal to 1.8 degrees Fahrenheit,

Do you see now why scientists, from all countries, prefer the Metric System??

That’s it, those are the basic metric measures.

Now you may be thinking I have left quite a few metric measures out of this list, but not so. These are the base units and combined with metric prefixes all can be specified.

Here is a of the most commonly used metric prefixes, a complete list can be found in the Reference section.

Know these and you know immediately the size being referred to. For instance, if something has “milli-” in front of it you know one is talking about a thousandth of something. The prefixes can be mixed and matched with anything: microliter, micrometer, microgram. These prefixes are also used outside of the metric system like kilobytes and Megabytes.

As already mentioned the Celsius scale uses the freezing and boiling points of water as the 0 and 100 marks (approximately, the exact temperatures have been changed to match the Kelvin scale). And I also mentioned that there is another widely used scale: the Kelvin Scale. Now why would scientists bother having two temperature scales? This will become apparent later in the book. But I'll give a clue here: 0 Kelvin is equal to -273.15 degrees Celsius. Strange! Or no?

BTW, the size of the Kelvin Scale degree and the Celsius Scale (also historically called the Centigrade Scale) degree are the same.

I lied. The real base measure of mass in the Metric System is the kilogram. There are historical reasons for this and for centuries the kilogram is the mass of an object stored in a temperature controlled basement in Paris. Currently scientists are looking at various methods to re-define the kilogram using a Universal constant rather than a hunk of metal that can only be found in one city on one planet.

The gram is actually defined as 1 one thousandth of that mass. But the physics community recognizes two systems of measurement, one based on grams and one based on kilograms. So I bent the truth a little.

The gram is a small amount of mass, about the mass of 20 drops of water or 30 or so dry rice grains. More often used for everyday things, is the kilogram (kg) which equals 1000 g. A liter of water weighs very close to 1 kg.

However, not everything is an "everyday" thing and for talking about small amounts or small things it is not uncommon to use milligrams (mg) and micrograms (µg).

You may have noticed that I refer to this measurement category as "mass", not "weight". There is a subtle difference here that will be explained further in the Focus section of this chapter.

Fortunately, in the metric system, the units of mass and the units of weight are the same and both are in grams / kilograms. This is not true of systems using the pound (lb) which is a unit of weight. The unit of mass in those systems is the "slug" equal to 32.2 lb. Rest assured we will not be using slugs in this book! No way.

The meter is used for everyday measures in our personal lives, almost all (outside of the U.S.A. and a few small countries) are very personally familiar with it.

Interestingly, usages such as Megameter or Gigameter are rarely, if ever, used even though they are "legal" metric measure names.

In science, scientific notation is favoured for large lengths and distances and will be, usually, in either meters or kilometers. Astronomically there are other measures for length such as parsec, light year, and AU for example. We will talk about these measures later in the book.

For smaller lengths metric measures are used frequently. Most common is the centimeter (cm) and the millimeter (mm). The micrometer (µm) is used often by Biology microscopists since cells are easily measured in this length. And when talking about wavelengths of visible light and atom sizes the nanometer (nm) and picometer (pm) are used.

As we've already mentioned the abbreviation of the basic metric measure of Volume, the liter, is L. However you will often see it written informally (particularly when hand written) as a small "l". A liter weighs very close to 1 kg. I believe everyone reading will be familiar with what amount a liter is since water and other beverages are consistently labeled with the metric volume, even in the U.S.A.

In the chemistry lab or at the pharmacists you often see things labeled in the milliliter (ml) volume range, 1 thousandth of a liter. A milliliter is about the same volume as 20 drops of water.

Another common measure of volume one sees is the cubic centimeter (cc or cm3). This is, as you would imagine, the volume contained in a cube that is 1 cm on each side.

But be advised, while the names are different the volume measure is exactly equal and the names are used interchangeably. That is to say 1 ml = 1 cc = 1 cm3.

People working in labs often work with even smaller volumes and can use "micro-pipettes" to measure volumes in the microliter (µl) range.

Now for some everyday comparisons of these measures.

What does an average person weigh? The internet says 75 kg for a man and 60 kg for a woman. I would say that if we also included the children of the World the 60 kg figure is more accurate. A healthy "average" horse weighs about 700 kg, equal to 12 of our "average" people.

How much does Mount Everest weigh? This of course is an approximation, it is not a complicated calculation but it is simplified, but estimates are in the range of 1.6 × 1014 kg. This is about 30,000 Khufu Pyramids, or 23 billion elephants, worth of mass.

Your average bathtub filled up would hold 250 L of water.

The volume of the great Pyramid of Khufu could hold 1000 of these swimming pools.

But we're getting ahead of ourselves here.

First a bit about mass vs. weight, and then on to discuss the Earth...

Focus: Mass is not a Weighty Matter

A 1 kg mass weighs 1 kg at the surface of the Earth.

Notice that I said "at the surface of the Earth". This is quite important. The Earth is large ("mass"ive) and so has a large gravitational field. Weight is nothing more than this gravitational attraction.

You've no doubt heard that something will weigh less on the Moon. The Moon is smaller (less "mass"ive) than the Earth and so has a lesser gravitational attraction and so things weigh less.

If our kilogram were put deep in space away from planets and stars (and so away from any strong gravitational influence) it would literally weigh 0.0; that is, nothing.

However...no matter where our kilogram is located in the Universe, on Earth, the Moon, Jupiter, the Sun, or in deep space it will always have a mass of 1 kg. This is because "stuff" (anything composed of atoms) has mass. Weight is simply mass's reaction to a gravitational field, how strongly it is attracted, and hence accelerated, to the other mass in question. Since everything you touch, and you yourself, are made of "stuff" then everything you touch, and you yourself, have an invariant mass that goes with you wherever you go.

Your weight will vary depending on where you are in relation to planets, moons, and stars, but your mass will not...unless you overeat or go on a diet.

One way to think of mass is that it is resistant to being moved. Makes sense, the more stuff it has the more energy it takes to move it. A ping pong ball weighs (mass) little and is easy to move. A bowling ball is weighs (mass) much more and is consequently harder to move. Extending: a bulldozer is really hard to move.

Another way: If a 1 kg mass was dropped from shoulder height onto your toes it would most likely end in a broken toe. Compare that with a 1 g mass dropped similarly, one would barely feel it.

So now we know the 1 kg mass and the 1 g mass hit your toe at the same speed. The difference in effect, then, is the mass. The faster something moves the more energy (here we will call it damage) it can do. There is a big difference in the damage a 1 kg mass will do vs. the 1 g mass. Consider how much more damage a 10 kg mass would do...ouch.

If you were to drop the 1 kg mass on your toe on the surface of the Moon, however, it wouldn't be so bad, maybe like a strong tap. The moon accelerates the 1 kg mass much more slowly.

But if you were in the orbit in a space station around the Earth the 1 kg mass would weigh nothing, as you all know I'm sure.

So if you threw it at your toes such that it's acceleration by your throwing equaled that acceleration of the Earth's gravity, it would do the same amount of damage. No weight, yes. But damage anyway. That is mass.

Say you are in this space station and must put in a new refrigerator. It weighs nothing, literally. But in moving it into place you will find it resists being moved (another property of mass) and once you do have it moving it takes a fair amount of force to get it to stop moving...so keep your toes out of the way.